Yes, a picture tells more than a thousand words. But you cannot really touch it! So Swatch came up with something else. This is a page about Swatch Production Stage Display Boxes. They show the production process of a Swatch watch in ten stages. Packed together in a nice descriptive box for you to look at. Good stuff!

Black and white, old style. This one originates from 1984! Back in those days Swatch already wanted to show the world how a Swatch is made. Not many where produced and these where not for sale. Many have been used to get the running ninth case and complete it with new straps. The one you see here must be the earliest one. It is handmade with black tape around the rims. The back is black cardboard. The labels are stickers on the inner case and there is a number on the upper right corner. This may have been a numbered edition. It's also a bit smaller than the later boxes. Very light materials. Tenth frame is face up. This one is expensive!

Another black and white, old style. This one also originates from 1984. It must be a bit later though. It seems machine made. The outer black case is now plastic though the back is still cardboard, white this time. The Swatch brand still has Quartz underneath as you would expect in this year. It is bigger and heavier than before The inner white case is now made of plastic as well, no small plastic pieces to keep the Swatch in place. No number in the upper right corner. Labels are printed onto the plexiglass cover. Tenth frame is face up. This one is expensive as well! 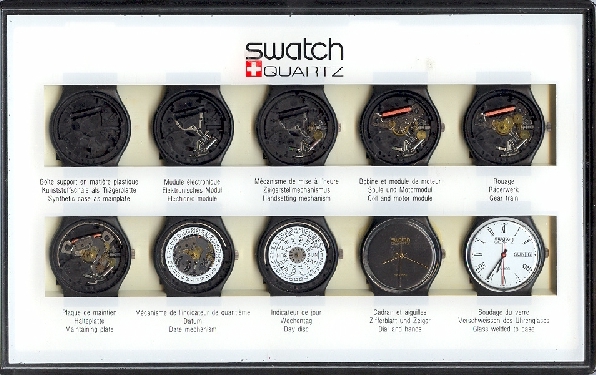 Below is a 1984 all blue production box that was in the auction of the Blum collection. Never seen it anywhere else, I think this is a unique piece. Would love to have this! 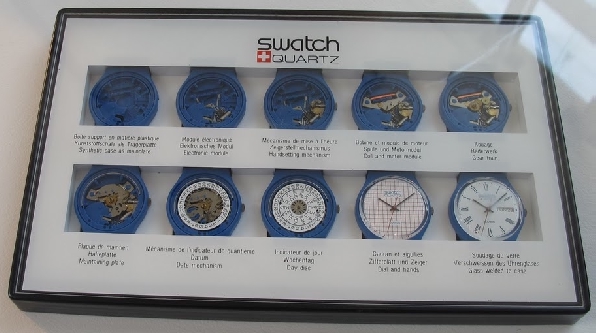 Now this is another story: 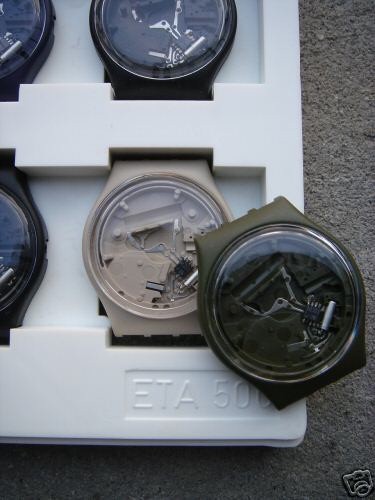 This image was copied from an eBay auction. They said it represents a 1982/1983 colour style production box, all original. There are different colours like grey, back, blue and green. Not all cases are closed and none of the cases are marked on the back.

My guess is this is not original. The white tray case is original but Swatch use these to store cases. The cases don't make the phases for constructing a Swatch. I think someone took a standard tray and filled it with leftover cases. So, I don't reckon it to be a real production case. The question if they ever made a coloured one around 1984 is yet to be answered!

A very unusual box of which I have only ever seen one. Like the other 1984 ones it has a front facing Swatch in frame ten. The explanatory texts are in three languages. And the Swatches are just like in the oldest 1984 types. Also it has cardboard box. But! There is one big difference and that's the new Swatch logo at the top. This makes it hard to date. But it's original. If yo have one like these, let me know! 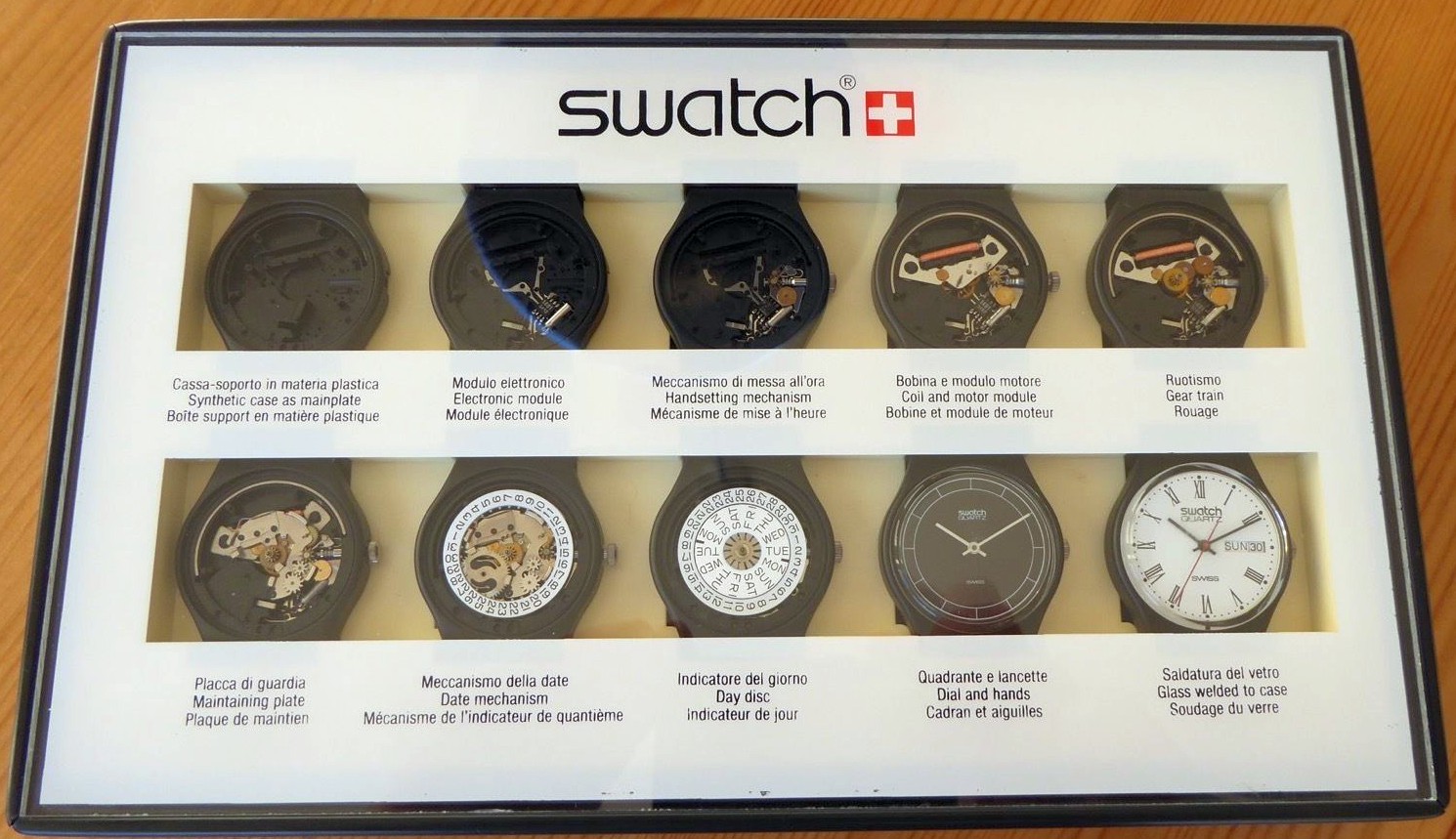 In 1988 Swatch made another series

Not many people know Swatch produced another series in 1988. They are very limited, rare and also quite expensive. These where not sold to collectors. Black and white. The Quartz is gone but Swatch now has a trademark sign. The outer black box is fully plastic. Four languages on the labels (Spanish added). The tenth Swatch shows the back. There are two types (with and without some extra plastic on the inner case). 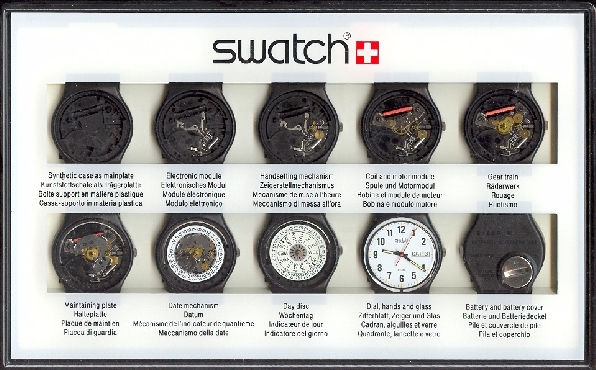 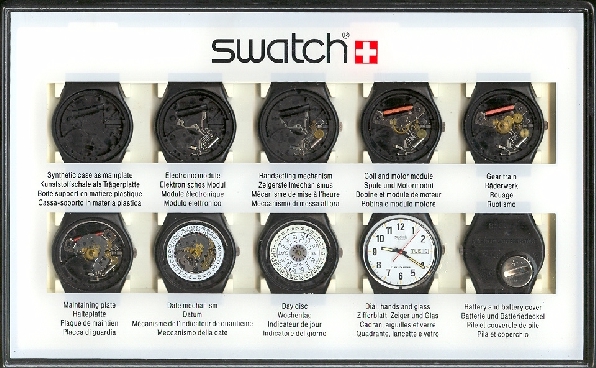 Unlike the other series these usually come with the same Swatches in frame ten. Check the pictures above. It's nice to find an original and a variant of the same watch!

In 1988 a handmade store display was produced in the USA

These I discovered as late as 2007. The story goes these displays were handmade in a quantity of around 50 pieces. It was used to display on the counter of Swatch selling shops. I found them in a sorrow state, distance holders missing, cases crudely reglued and dirty. No real problems so I managed to restore them to new. They are actually quite rare things! As you can see either in black and white or in colour. 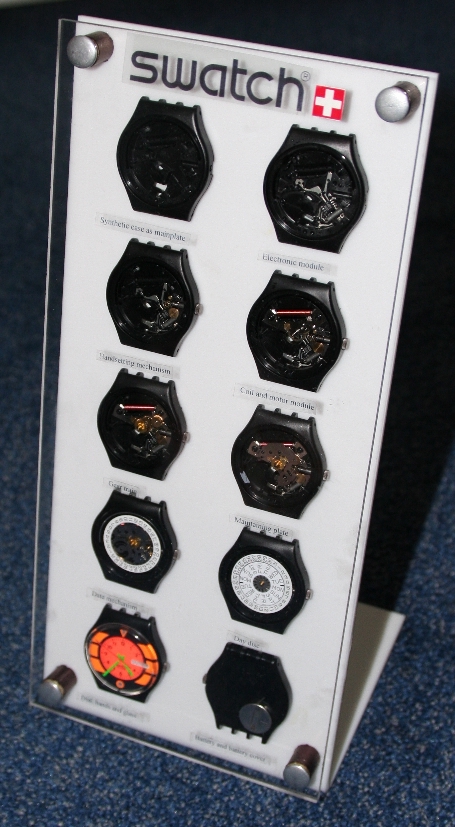 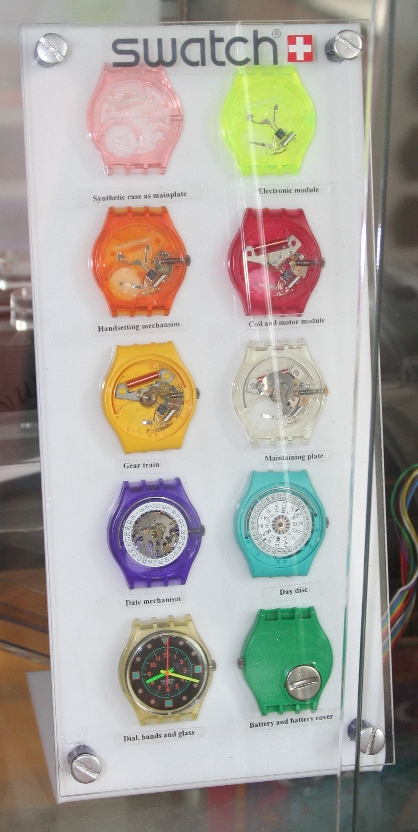 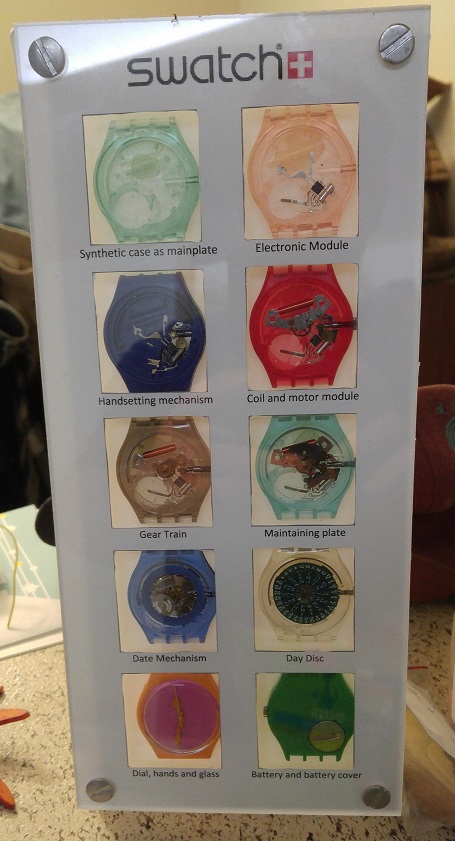 I am not sure it's all original. I think the watches where taken from a 1988 production box because I could still see the marks of where they where glued. The watches in frame nine were probably replaced by others. They might still be original though and it are fun things to have.

In 1993 it was produced again for collectors

Black and white, new style. The outer black box is now, no more white back. fully plastic. Mader in large quantities for collectors. 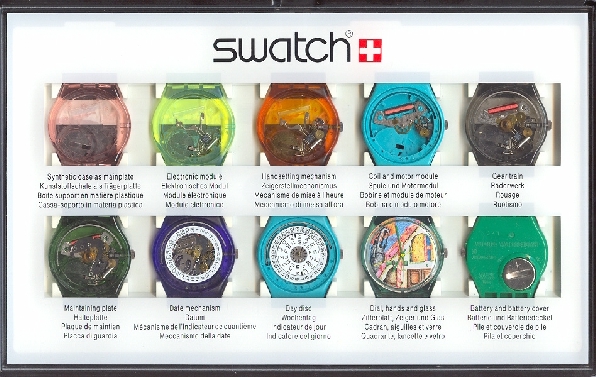 Someone told me about 18 different of these colour boxes must exists. I have seen many different and I have a feeling this can be right. I have stopped compiling a list of all colour combinations as this was very time consuming.

These boxes where sold by the Swatch Collectors of Swatch in 1994 and were offered for sale in "The Swatch World Journal" Swatch World, issue No. 6 Fall/Winter 93 on page 18. This is the orginal text of that article:

Attention! This is an older article so do not send anything to your Club as you will find out these boxes are not for sale anymore!

The boxes where shipped packed inside a matching cardboard box.

Do not be fooled!

The Swatches in these production boxes do not run. In general Swatches have been used that have errors in them. This way it was not only cheaper to produce, Swatch had less to destroy and also if anyone would attempt to get any of them running it would not work. So all are spoils from the quality assurance process. Believe me, besides the Swatch in the ninth frame, none of them works or is capable of working. Consider yourself warned!

I heard the number produced should be around 50,000 but I do not have an official statement about that.

There is also an Irony Production Stage Display Box and here is a picture of it:

A prototype, obviously. As you can see the box has eleven stages, the first one of these containing the metal powder an Irony is made of. The other stages of the first row show different cases. The stages in the second row do not really show the process of making an Irony but it has all the pieces of an Irony separately and the final stage contains a finished Irony. Of this very rare box probably only around 100 pieces exist, each made individually. These where produced only for dealers, agents and Swatch-branches, not for the collectors market and as such, where never sold. Rare and expensive. I do not have this box myself so I would really like to have one. Can anyone help me? 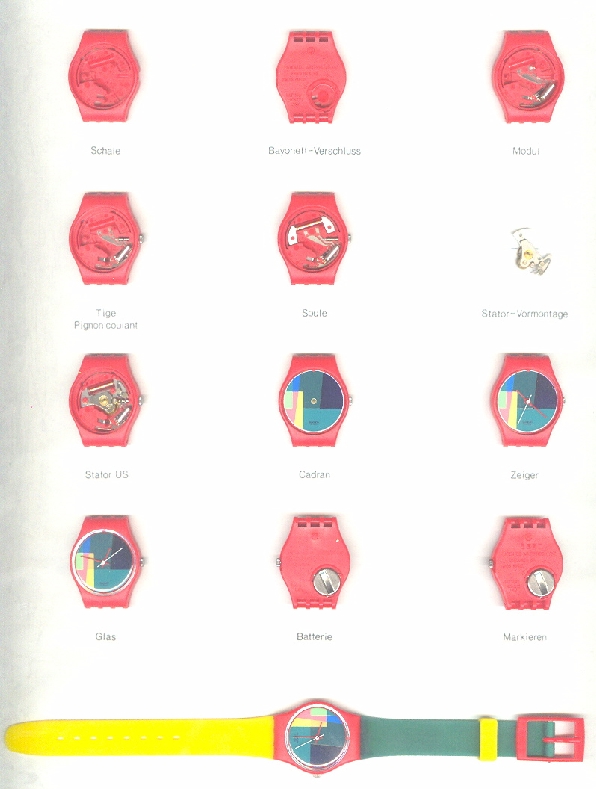 A ladies colour one, probably from 1985. All thirteen (!) frames show the same watch. It's very nice. A real rare thing!

Finally here we have a prototype for an Irony Automatic Production Box, based on YAS100, Body & Soul. It's not perfect yet but still I find it pretty amazing. 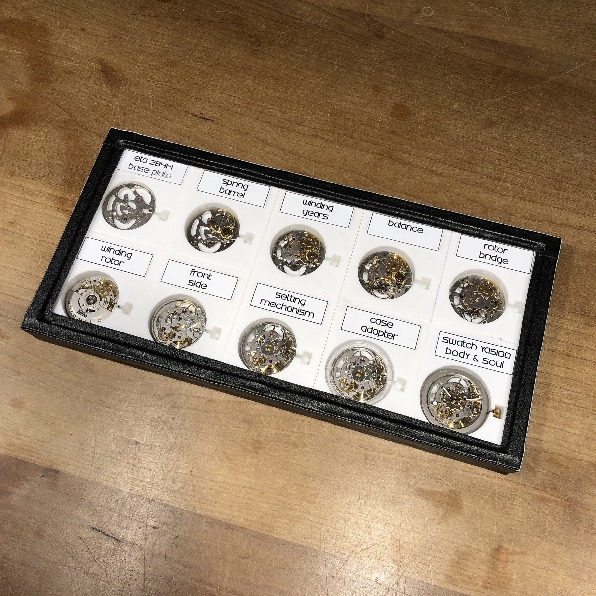 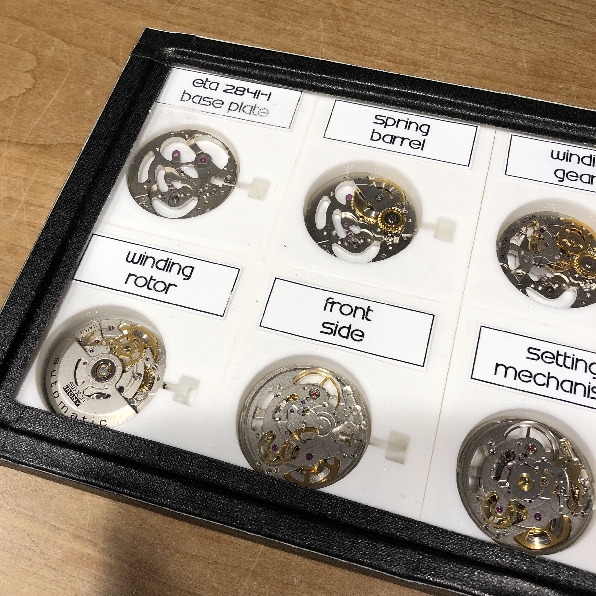 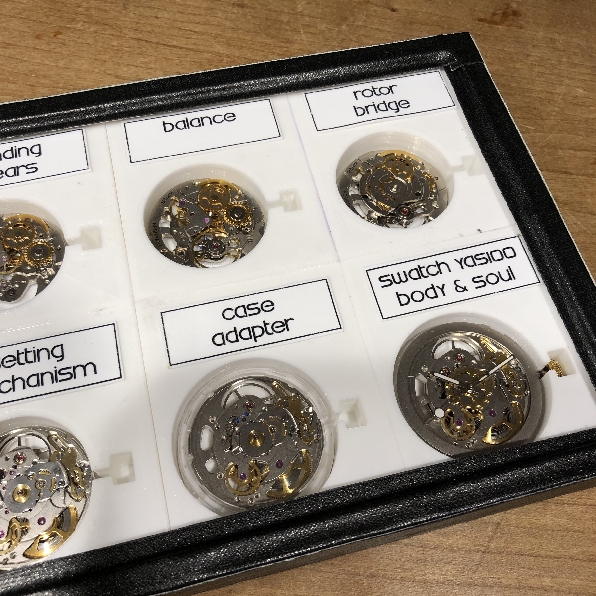 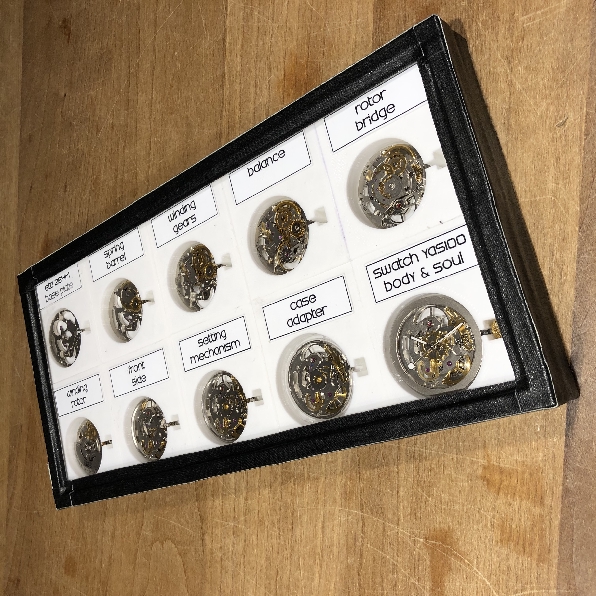 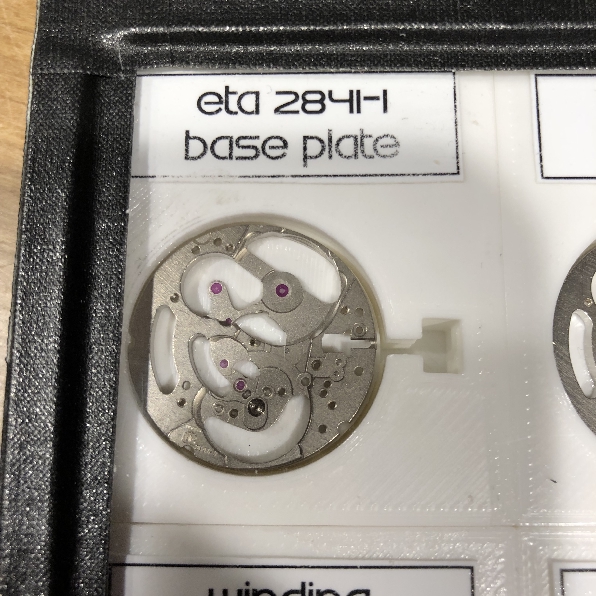 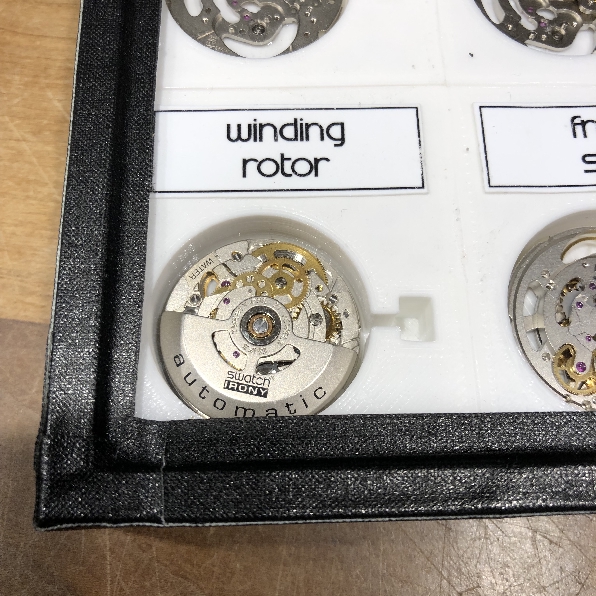 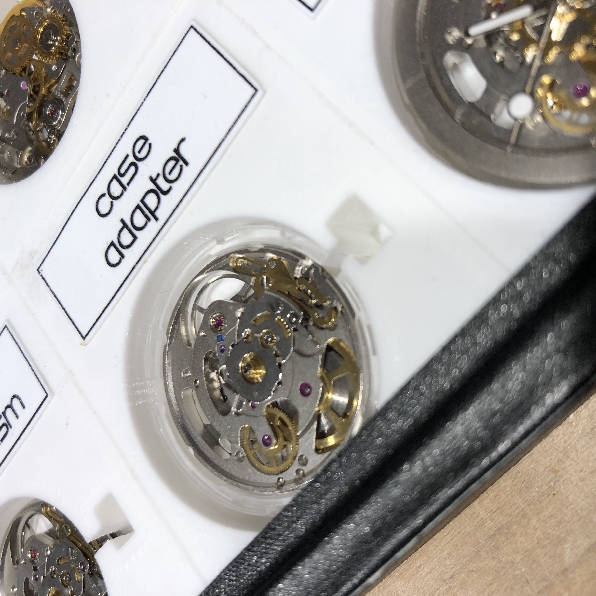 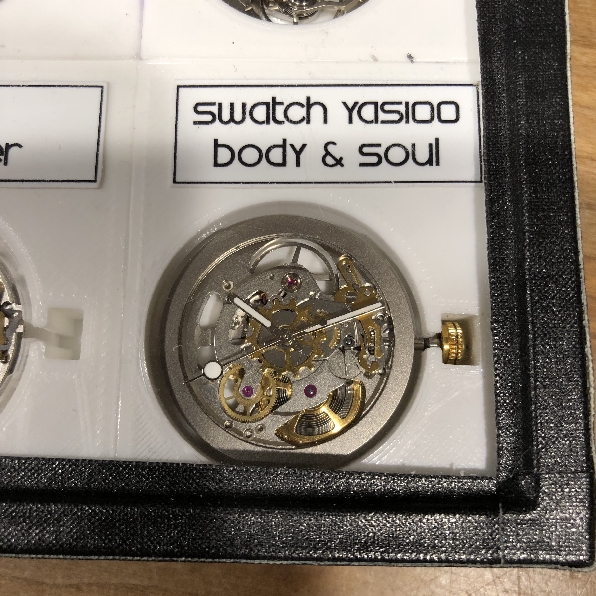